A Teacher Receives the Medal of Excellence of Science for the Leading Teachers in the Day of Science.

A Teacher Receives the Medal of Excellence of Science for the Leading Teachers in the Day of Science
Professor Dr. Dhoya Salman Hassan, from the University of Information Technology and Communications, received the award of the Medal of Excellence of Science for Pioneer Teachers during the celebration of Science Day.
The ceremony was held at the University of Baghdad in the presence of His Excellency the Minister of Higher Education and Scientific Research, Dr. Abdul Razzaq Al-Issa honoring more than 100 professors and researchers of innovation and innovation awards. The awards included the award of the Medal of Excellence for Pioneers, the distinguished university, the distinguished scientific journal, the research centers, and units. A postgraduate student who published part of his project and the finished grades.
Dr. Douya appreciated the role of the Ministry in supporting the scientific process and the care of its scientists and innovators. She also appraised its constant efforts to raise the scientific and research levels to bridge the academic relations with various Iraqi state institutions in order to study the obstacles of its work and develop the science curricula in various fields. 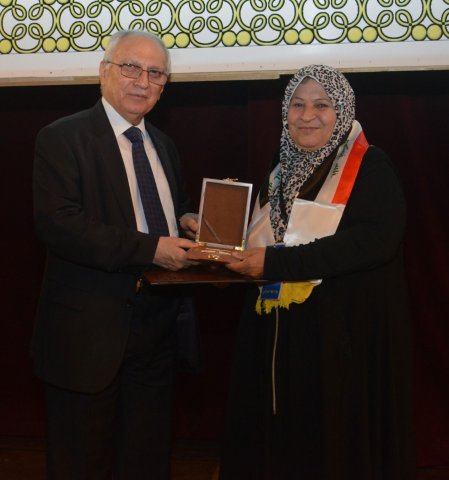